Above my desk is a poster that says “all artists are cowards”, it is an exhibition poster for an artist called Bob and Roberta Smith and every time I look at it I smile.

Bob and Roberta Smith are one of the many new rising talents who have been chosen by Nicholas Bourriaud to be part of the Altermodern exhibition at Tate Britain. The conceit of the show is based on his naming what he sees as the next movement in contemporary art that replaces post-modernism. A post-post-modernism, that encompasses the global, networked, intercultural existence many of us now live in and some of us are immersed in.

The show is funny, clever, curious and encapsulates something about the 21st century that has a real resonance. The wall paintings in Franz Ackermann’s installation are like looking at a networked digital space from the inside. They seem to map some strangely familiar visualisation of online spaces and the cyber journeying that takes us between digital information and its interactions. 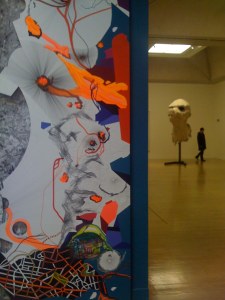 This idea of the (alter)modern journey comes also into Walead Beshty installation of Fedex boxes. These large glass cubes that bear the marks of their travels between the artist and a variety of destinations, are like the scars of environmental damage or the dangers of too much travelling on the human soul. The corners are cracked, the glass is broken and they seem sad, lost and rather beautiful. 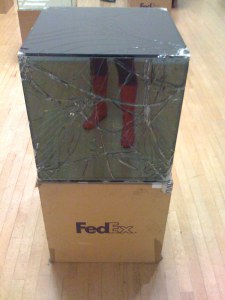 Loris Greaud installation (wires attached to boxes that resonate and vibrate the physical architecture of the room in time to flashing blue lights) seems to take you deep inside his head. But unlike the Ackermann paintings that seem to portray an internal digital space in a very public domain, this work takes you into the very intimate personal space of the artist’s own thoughts and brain waves.

Bob and Roberta Smith is adding a new piece of work to the show each week. It’s creation starts with a conversation with the curator at 11am on a Monday morning which is then developed to becomes a new work to be placed somewhere in the gallery. Each new piece stays insitu for a week before being moved to a public storage area – a kind of art lost property area – where each piece can be moved aside. Each of the works possesses the same humour and cut-the-crap satire that I have come to know and love from my office poster. One expresses the regret “ I wish I would have voted for Barack Obama’ another simply states next to its found object sculpture consisting of a trumpet and megaphone ‘I was up all night making this’. 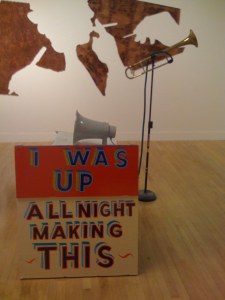 There is a lot more worth seeing – the quietly breathtaking moonscapes by Darren Almond, Simon Starling’s replica desks that encapsulate the loss of detail and signal that comes over distances. You need at least two hours to do the show justice, of which at least 20 minutes is needed to watch Lindsay Seers ‘quasi-documentary’ about her own life as an artist and the impact that not speaking until she was eight had on her artistic development. In particular her time spend as both a human camera and projector. I left her projection space totally unsure if any of it was true but full of big questions about the nature of communication and seeing both inside and outside of us.

You can also for an extra 65p buy a badge and be your very own Bob and Roberta Smith. I did and am. 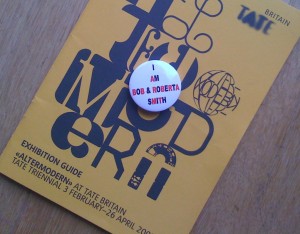